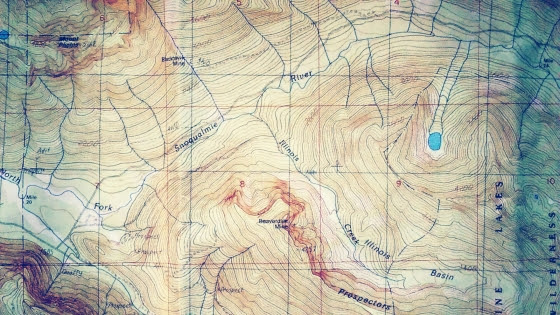 Actually, this lake doesn’t have a name that I know of…

There were mineral claims in and around the lake however; The Huckleberry, Lake View, Kate Sharpe, Gem and the… Lert.

Huh… so you guys went with Lert? Was that a group decision?

Nothing is really known about the history of these claims except for their names.

There are three others however, known as the Lucky Strike Claims, and they were worked from 1947 to 1951.

It is in memory of the four years of labor at these claims that I bestow upon the lake: 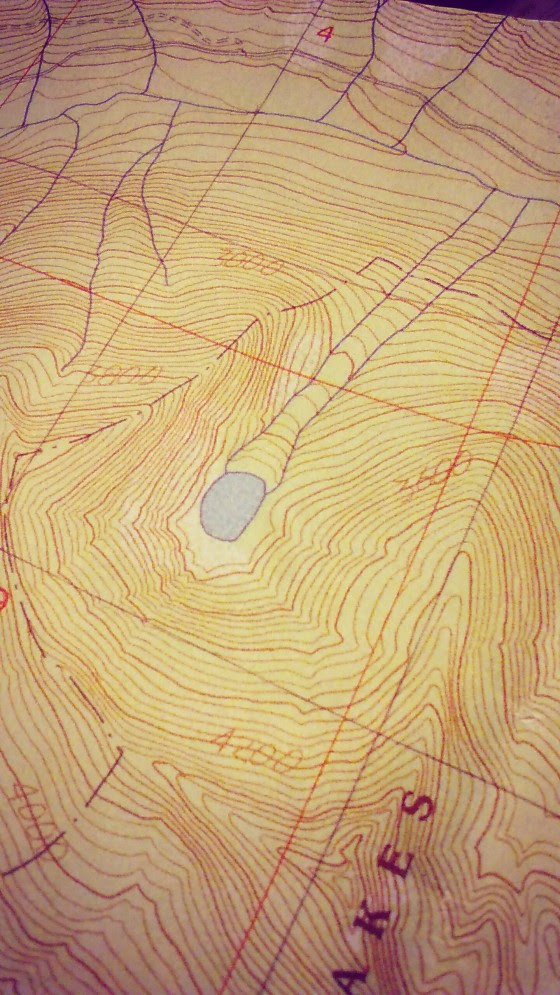 In section 9 there is an unnamed lake nestled in a cirque. Two creeks flow down from it. This is our objective.

Take the north fork road as if you were heading to Bare Mountain.

After crossing the last bridge, instead of turning right towards Bare Mountain, continue straight.

After passing the old Blackhawk Mine road start watching the mountain to the south for the cirque.

To the best of your ability ascertain your position relative to the western of the two creeks flowing from the “lake”.

This will put you in position to find the downed cedar to cross over. 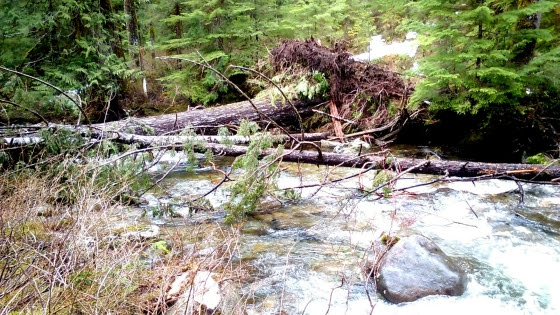 I found this to be a very pleasant jaunt considering that there isn’t a trail and it requires crossing the North Fork Snoqualmie.

It’s not too long and pretty straight forward so I’d say if you are looking for an easier off trail experience this one ain’t bad.

You’ll know if you are at the right place if there is a medium sized cedar down across the river.

This is where I crossed, it’s a little hard to get on and off, but it beats the alternatives.

The cedar is roughly in line with the western most of the two creeks coming from the lake.

My route traversed the hillside towards the eastern creek and mostly followed that up.

The forest here is often open and free of oppressive under brush. Most of the way I followed what appeared to be a well used game trail. 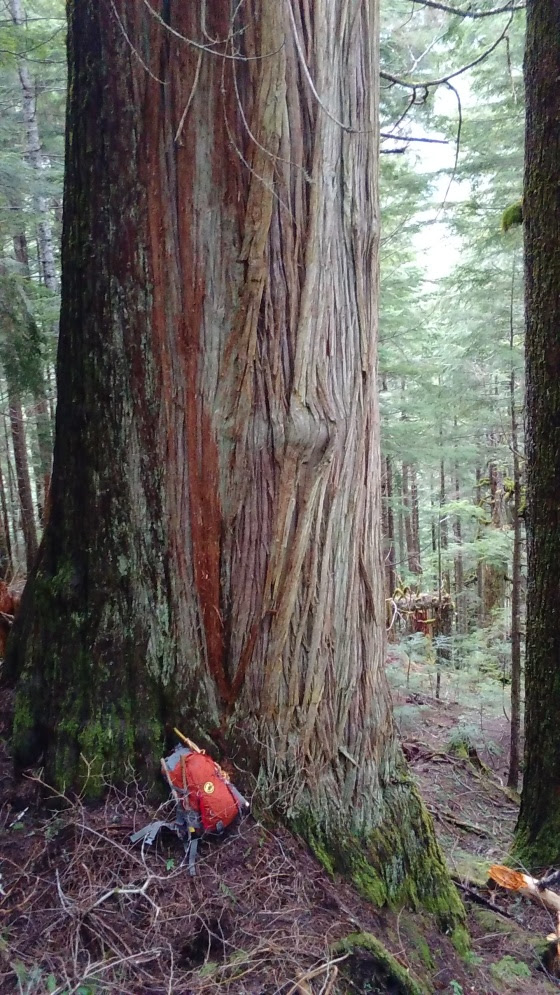 There are some absolutely massive trees growing on this mountain.

If you want a taste of ye olde Northewest, this is a good one.

At 3000′ or so I broke out of the trees and into talus and evil scrub. To my west, the wonderfully slabby watercourse of:

I hiked up just to the east of the falls.

With snow this climb was a cinch. In summer you’d probably end up taking the talus to avoid the evil brush growing around the creek and falls.

Either way you’ll end up at… 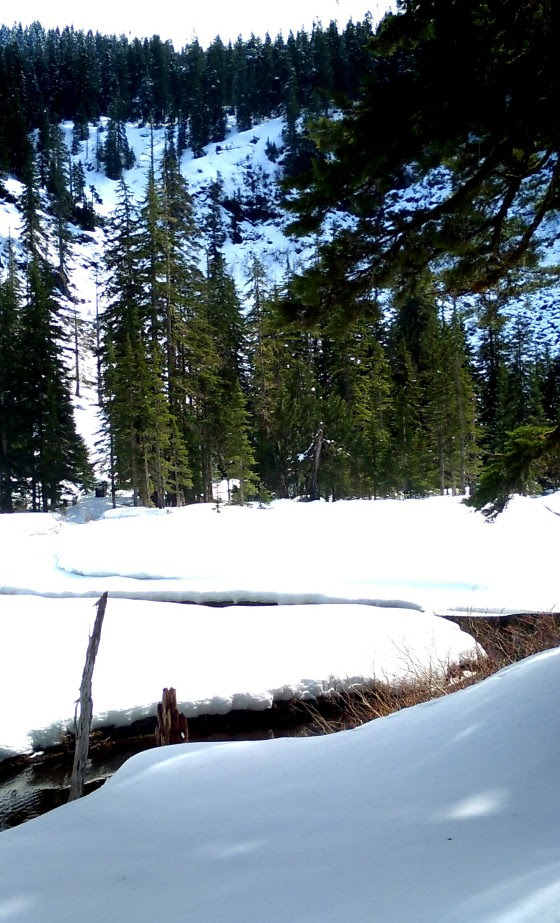 The lake’s small outlet stood out in the sun as I ambled up.

Floating in a pond of water no bigger than a standard parking space were a pair of mallards.

…and that was that, they took up the whole lake.

Even with the snow gone I don’t think there’d be much more, maybe a large bog. A marsh perhaps.

The cirque is trenched with a small and snaky mountain stream. It flows through a diminutive stand of trees and mountain marshes.

But I gotta believe this was a lake, I mean one of the claims was called the Lake View.

Then again, they may have been the same people that named the Lert.

If it was a lake, you gotta wonder what happened to it… 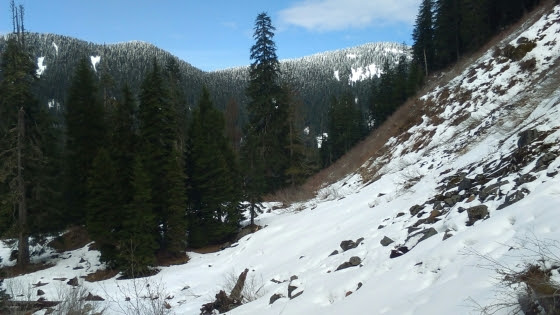 It’s said that somewhere in the area is a 30ft shaft.

Aside from that some promising quartz veins are said to carry pyrite, arsenopyrite and chalcopyrite. 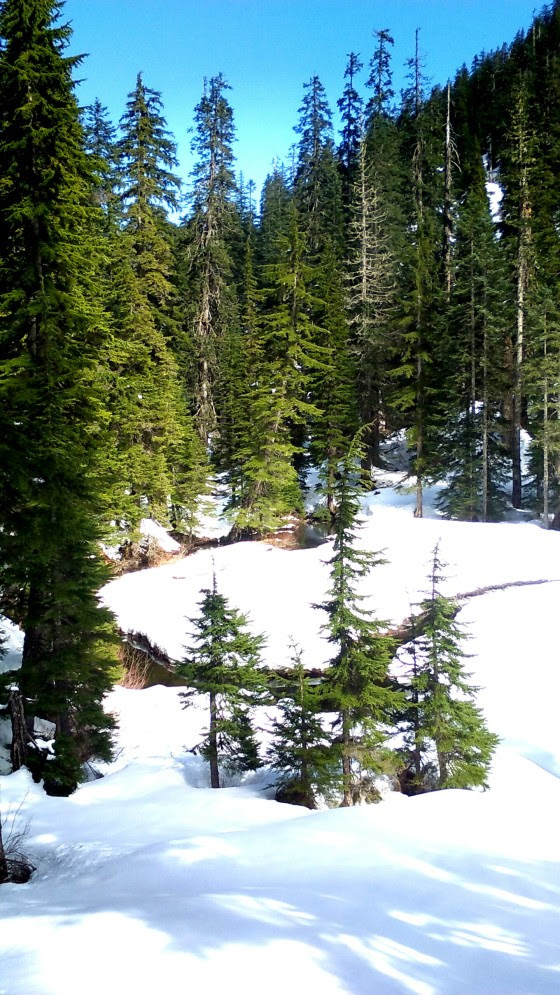 I think you’re better off leaving the pole in the car for this one.

I’ve heard that at some point in the past, presumably when or if this was a lake, it may have had a few fish.

There might be fish in some of the deeper holes in the creek, but ya, I’ll let you think that over for a minute.

I was really hoping there’d be a lake here…

The Lilliput landscape is pretty cool though. 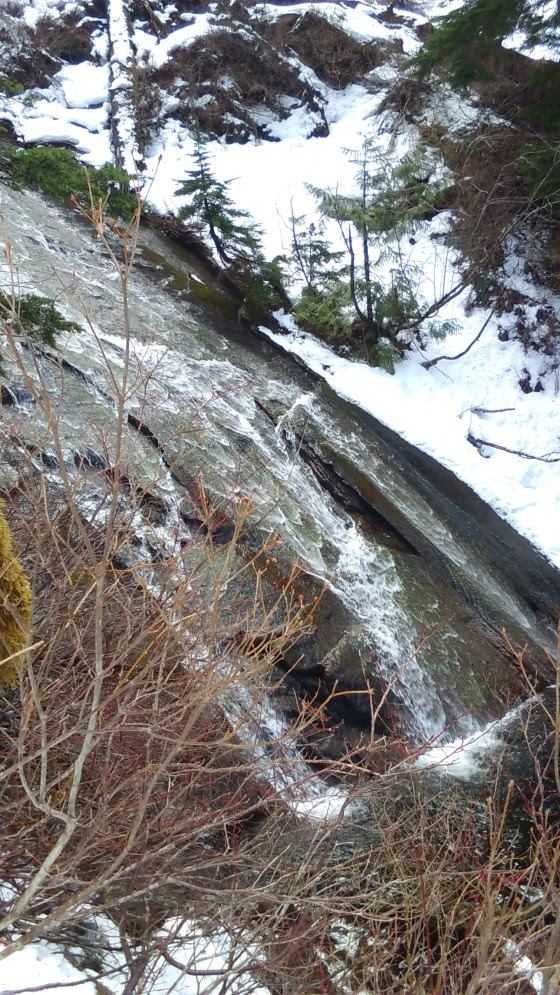 Well that about sums that up.

Not a lake, potential history, lots of solitude… 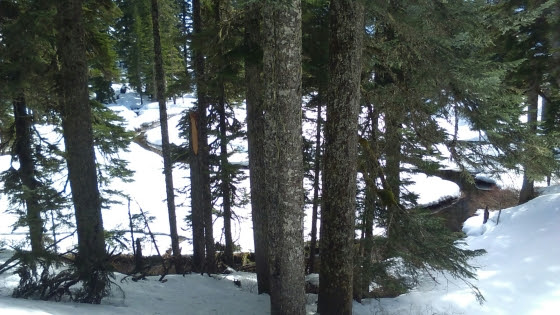