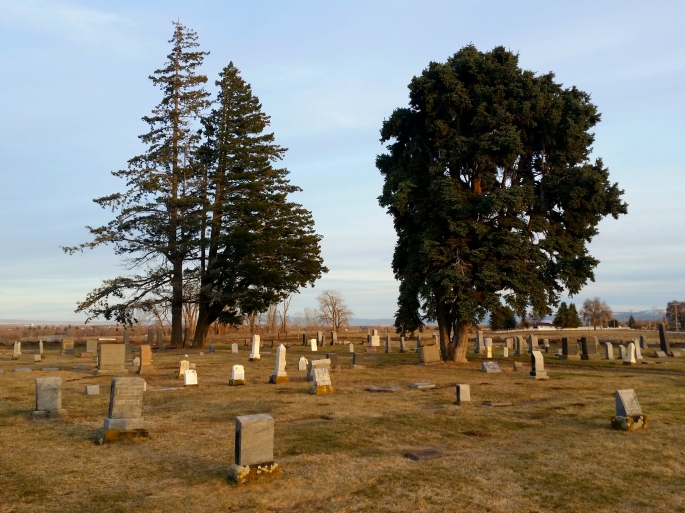 To the transfixed I-90 motorist, Thorp, WA probably isn’t much more than a large white building on the north side of the freeway, emblazoned with the words ‘Thorp Fruit and Antique Mall’.

You can’t miss it!

While a lot of folks might only ever see Thorp doing 70mph on the interstate, or from the fuel pump at the gas station, for the more interested among us there are things to see…

Just across the interstate from the gas station in fact, one can find the historical Thorp Cemetery. Not a bad starting point if you’re looking to discover Old Thorp…

The cemetery parcel was donated by a farmer named Herman Page, who made his claim in the Thorp area in the 1870s. (Later buried in this very cemetery)

In the 1880s the cemetery became the property of the Thorp Methodist Episcopal Church and was operated by the Thorp chapter of the Odd Fellows Lodge until 1940, when the lodge was dissolved.

Some decades later in 1962, the Kittitas County Cemetery District No.1 took over management of the grounds and continue to do so today.

This is still a working cemetery and is regularly maintained, but fully retains a pioneer cemetery charm.

Set where the mountains meet farm country, the views are unique. Mt.Stuart rises high to the north while sparse pines give way to farmlands eastward.

Many of the stones date back to the early 1900s and into the century before. The cemetery holds a handful of unique and well aged markers to see, including an obelisk.

A reoccurring apparition is said to occasionally appear in this cemetery…

In the 1890s a young Indian woman named Susie was lynched in the Thorp area by assailants unknown. The brutal murder is recorded in official Kittitas County records.

Since that time ‘Susie’ is said to appear atop a ghostly white horse in the Thorp Cemetery, weeping amongst the headstones on clear, moonlit nights.

Susie did not appear during my last visit, and this cemetery is closed during hours of darkness.

Not too difficult to find from the Thorp Fruit Antique Mall: Head southward on South Thorp Highway, crossing over the I-90 before taking a right onto Thorp Cemetery Road. The cemetery will appear on your right in little time.