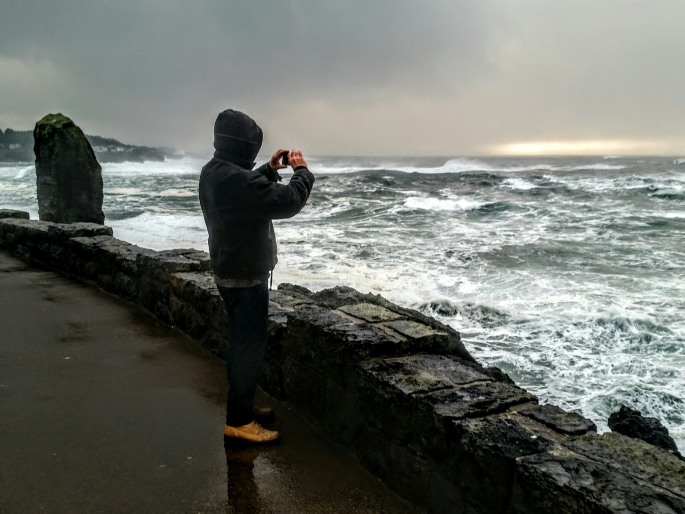 Got down on the Oregon Coast for a few days in mid December, and happened to catch some wild waves in Depoe Bay, OR.

High tides and howling winds battered the shoreline, spattering storm watchers and sending seawater onto vehicles traveling along the highway 101.

A Horn that Spouts?

Depoe Bay’s waterfront features an interesting natural feature called a “spouting horn”. Basically it’s a small opening on the top of a sea cave… kinda like a whale’s blowhole!

It works when a sufficiently powerful wave is focused into the cave, sending a geyser of seawater out of the “spouting horn” and high into the air.

To catch the wildest waves, one must become a sort of amateur oceanographer and meteorologist, watching and waiting for a perfect storm of high tide and raging seas.

Forty feet or better if it was a foot!

Watching the undulating waves is mesmerizing; one might feel like an aspiring sea psychic, looking to the waves for clues to predict when the spouting horn will emit it’s mightiest Neptunian toots.

Transfixed, I watched as wave after wave collided. Then as a deep trough in the pattern opened up and was suddenly filled by a rushing cataclysm of saltwater and seafoam, forcing thousands of gallons into the sea cave below.

A rainbow of rain slicker clad revelers had gathered, marveling in a hushed awe as the resulting jet of ivory exploded from the spouting horn and into the stormy heavens.

Their trance broken by the visceral slap of the salty geyser coming back down onto the rocks. Even over the enveloping roar of wind and wave, the satisfying slap drew the applause of the brine faced onlookers. Who are they clapping for?!

Respite from the sideways rain was fleeting, but the unwavering crowd stood steadfast against the storm. I was wearing blue jeans and they were SOAKED, so I was ready to go!

Just north of town there was a miraculous break in the tempestuous weather, which enticed us to pull over at Boiler Bay to catch a deceptively warm looking sunset.

If these tides happen to coincide with some ugly weather…

There will be some waves! …and possibly serious erosion and flooding.

The first surge was from Dec 21st – 23rd, but they’ll be two others in the coming months:

January 20-22 will bring the second round of King Tides to northwest beaches.

February 18-20 will be the last chance to catch the King Tides until the next winter!

Any northwest coastal town looking for a new moniker? Coos Bay? Illwaco? How about Edmonds?

(you’d have to be familiar with the Edmonds town bumper sticker.)

Who says it’s gotta be a coastal town? How about Moses Lake King Tides? or Grand Coulee King Tides?!